Since the version 3.2 of the APM:Copter firmware it is now possible to release a parachute from the flight controller ! It can be done manually but also automatically !

Please be careful with this feature as it is still experimental (as of the 25 of July 2015).

What you will need

A all in one system available off the shelf ready to be mounted on your multirotor, such as those :

Or, if you'd rather make it yourself. You will need to build your own deployment mechanism triggerablewith a PWM signal like a servo. You'll then need to add a parachute, once again you could choose to make it yourself but there's some fine aerodynamics at play and we recommend choosing one of the commercialy available parachutes from Opale, MARS or Fruity Chutes. Choose a parachute large enough to slow your aircraft to 5m/s maximum.

Connecting a servo to the Pixhawk

Most parachutes are triggered with a servo. And that's good because it is at the moment the only method supported by the Pixhawk (it should soon be possible to trigger a relay).

Everything on the software side is done with the Mission Planner software, available for free here. Go to the "Full Parameter List" and change the values of the parameters shown on the picture below

If you want to trigger the parachute manually you may do in the "Config/Tuning" tab, "Extended Tuning" Menu, change the "Ch7 Opt" parameter and select "Parachute Release". 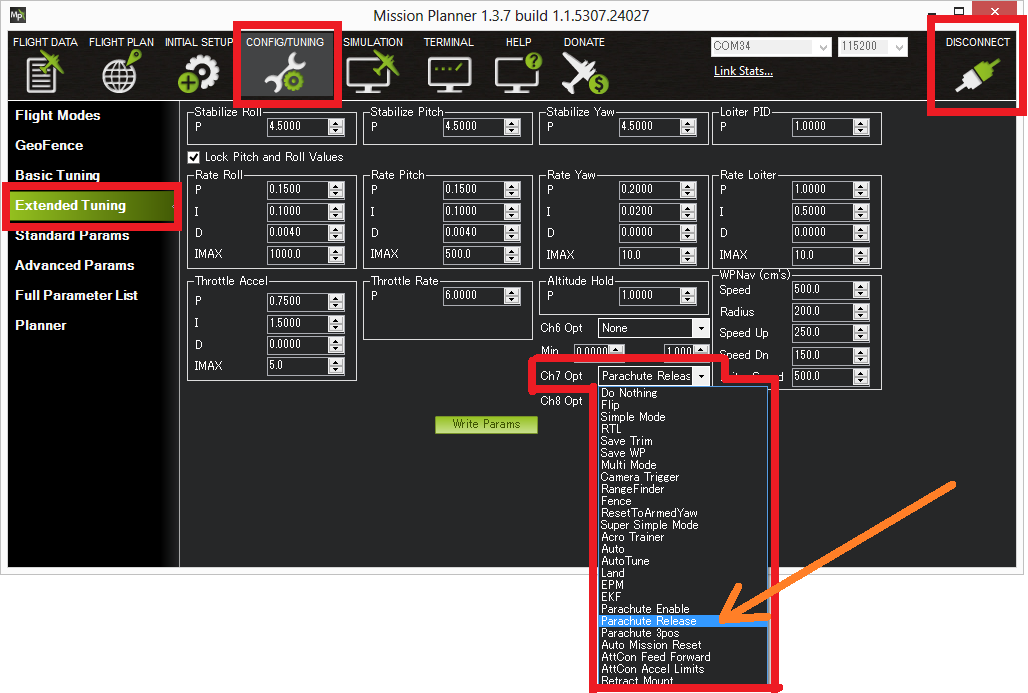 When will the parachute be released ?