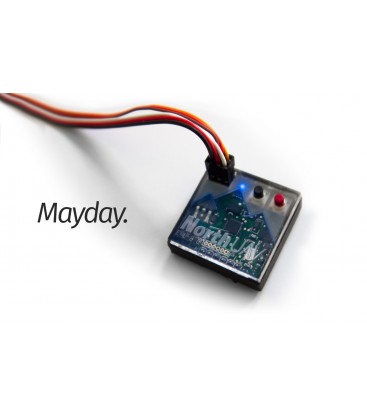 Mayday is a standalone device that detects when your quadcopter is crashing and can deploy a parachute.

The most effective aerial protection system around.

North UAV believes that the future of unmanned flight can bring the world amazing new products, services, and experiences. But right now these incredible new devices are a little bit hazardous when used incorrectly. That’s why the team at North UAV has worked really hard to create Mayday.

Mayday is a super smart device that uses basic machine learning to determine if your quadcopter, tricopter, octocopter, or hexacopter is crashing. If it detects a crash it can deploy a wide range of servo based countermeasures.

You can program the Mayday to do a wide range of servo release motions to protect against a crash. This allows it to be used with almost any recovery system on the market. it is for example compatible with the MARS Mini v2 and the MARS 58 v2. 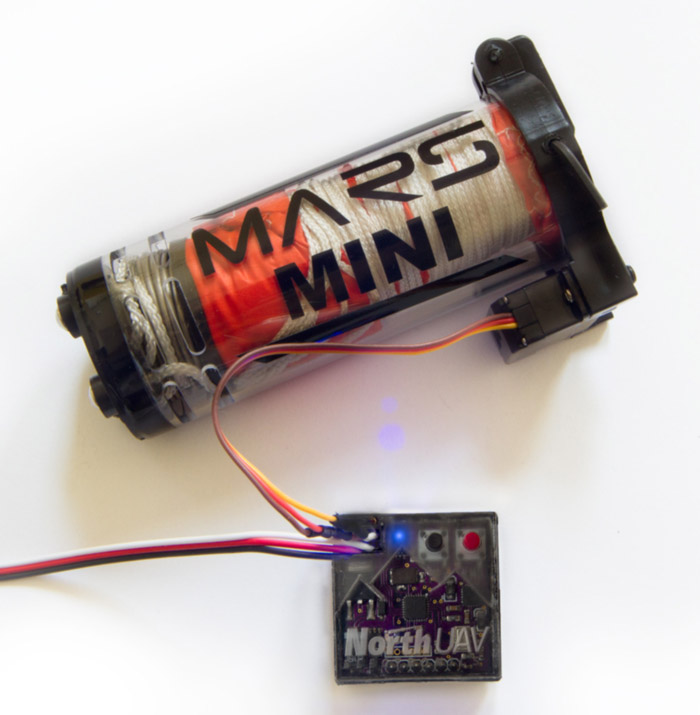 Works as a standalone device.

The Mayday can be used all by itself without any connections to a flight controller. Connect the parachute release servo to the Mayday board then connect a small battery, and you’re ready to go! Connecting the Mayday to your flight controller adds an extra level of control when flying. For example: You are about to do something totally unexpected and new, like a flip, and you want to make sure Mayday doesn’t fire on accident. Simply adjust your RC servo input to the lower PWM range to tell Mayday not to fire and to try learning this new motion. Or adjust your RC servo input to the upper PWM range to override Mayday and to fire a recovery system.

Mayday can work with any and every multirotor setup seamlessly. Because it uses machine learning to determine what your normal flight pattern is, you can use Mayday without having to enter in a ton of data or set certain perimeters for it to trigger by. Just power and go. Simple!

They partnered with one of the best UAV parachute manufacturers in the world. Mars Parachutes has provided them with invaluable feedback and advice on how to make Mayday the best it can be. Some of the very first tests were done at the Mars Parachutes location.

Sensors: The Mayday uses more sensors than the average smartphone. Onboard it has a high-resolution Altimeter to detect relative altitude, a 3-axis Gyroscope for rotation speed, 3-axis Accelerometer to detect angle and gravity, and a 3-axis Magnetometer to for angle and heading relative to magnetic north. No more buying separate IMUs that might not even work with your board.

Some of the most commonly used multirotors on the market don’t possess the functionality to add a parachute release to them, and if they do, it’s very limiting and prevents you from using something else like a camera gimbal.

In most of the crashes they analyzed, North UAV found that mechanical failures were pretty rare, and that it was much more common for a battery connector to come loose, a flight controller to reset, or a complete power system failure to occur. All of which can prevent a manual release.

But it’s not about humans doing it better than machines. Humans, for the foreseeable future, will always be better at making certain decisions when compared to a computer. Mayday is not about beating or outperforming human intelligence. Mayday is about getting this technology (UAS, Quadcopters) to the point where we can trust it to carry out tasks autonomously; and to do it on a large enough scale to where it would be ridiculous for a human to monitor a single system in case of a crash.

For those that are still not convinced, Mayday does have a manual override and suppression input for those who still want some autonomous protection but want to be more in control.

Can it be updated? What if there is a glitch?

Although they didn’t show it in the video (or product pictures), they are working on a computer program to allow for easy updates and setting changes to the Mayday via USB. (Don’t worry, they know the V1 of anything will always have a few bugs. You’re covered!) Side note: North UAV also have plans to use this software as a way to show usage stats and to increase their crash data knowledge base. This will allow them to detect patterns and possibly be able to spot warning signs, preventing a crash altogether.

For a list of complete instructions and documentation, please visit : http://www.maydayboards.com/downloads

Does the Mayday come with batteries ?

As of now the Mayday does not come with a battery. But we designed Mayday to be able to take many different kinds of power sources so that finding a battery is as simple as pie. Everything from a regular Li-Po to a couple AA batteries will work just fine on the Mayday! We are currently discussing how we could manufacture or source different kinds of adapter cables for the Mayday. We really want setup to be as simple as possible!

Can Mayday be used with two parachutes ?

Of course! Mayday can supply plenty of current for dual servo use. To connect another servo to Mayday we would recommend a servo splice cable. Just keep in mind that they will be receiving the same PWM signal from Mayday!

Is the Mayday reusable?

Absolutely! The Mayday can be used over and over!

Can it be updated? What if there is a glitch?

We are working on a computer program to allow for easy updates and setting changes to the Mayday via USB. We expect to be able to deploy the software about a month or so after rewards are shipped. (Don’t worry, we know the V1 of anything will always have a few bugs. You’re covered!) Side note: We also have plans to use this software as a way to show usage stats and to increase our crash data knowledge base. This will allow us to detect patterns and possibly be able to spot warning signs, preventing a crash altogether.