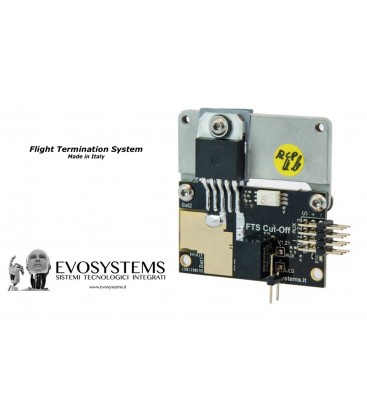 The following text is a slightly reworked translation from Google Translate, you can view the original description on the manufacturer website.

Before presenting the system it is necessary to make two assumptions:

One of the risks of failure of our systems, what they fear most ENAC (Italian FAA), is the "fly-away", to prevent this serious event, normally our UAV provide at least four solutions:

As can be seen, to get to the "fly-away" has already occurred before the failure of the system or more than one, then we are already in the context of remote events even if possible, and then in the "reasonable risk", but we wanted to go well ...

We had to include also the possibility of failure of the device or of the FTS LiPo same, preventing UAVprecipitate to cause one of the two elements mentioned.

With regard to LiPo, one of the characteristics of our device it is to be able to intervene in the event of failure (power failure / short circuit) of this imported element, which in these cases is isolated from the system, thus preventing also the second LiPo can follow the same fate plunging the middle.Obviously the reference is open to all media that include the presence of two LiPo and two FTS (one for LiPo), which in our opinion is a detail that should not be underestimated.

Our Form FTS is realized by taking advantage of two power switches in the solid state by more than 150A each, low dispersion, and that connected in parallel to bear a maximum load of 300A * for each LiPo, so widely over the usual range of absorption of our UAV does this ensure, in the context of "reasonable risk", the continuity of service even in the event of failure of one of the two power switches, thus avoiding that the medium can fall unintentionally.

As regards the power of the RX, this is directly through a BEC on the module and
upstream of LiPo. This particular configuration keeps the receiver powered even after the separation power of the UAV, allowing us to activate any other add-on modules of the emergency system.
The PWM signal sent from the RX system FTS, is then forwarded to a circuit filters it against interference or false signals, and only when it is certain that he received a correct sequence sends the command through an optocoupler.

This is one reason that allows us to define the device as "redundant"
The possibility that the FTS system from damage, for example in the event that followed to provide power to the system even after the termination command, would be considered a second concomitant failure, therefore, normally not covered;
We thought of that!
The causes that lead to a problem of this type, may result from:

Let's analyze in detail some points to reduce the risk of failure at "reasonable":

In the case of UAV double LiPo (with double module FTS) obviously the probability that such an event might occur on both FTS modules is actually very remote, in this case would be considered the THIRD failure consecutive event very unlikely and, in event were to occur on one of the two modules the autonomy of flight, it would reduce any case to about half.