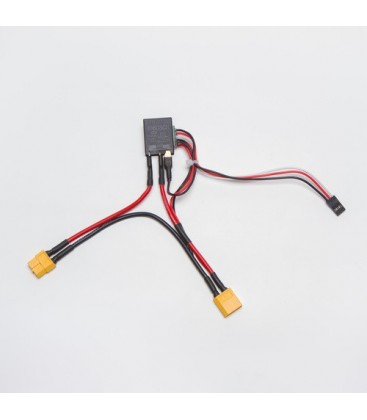 The Relay trigger for Skycat parachute launcher. Connects to the receiver, flight battery (or separate battery) and to the Skycat launcher unit.

The Relay has a constant current rating of 30A, therefore it can also be used for high current RC switch applications

The trigger unit listens to a PWM signal from your UAV's radio, and upon command, transfers energy from a UAV battery or dedicated battery to the launcher. Two or more triggers are supported for redundancy. Weight: 46 grams / 1.6 oz.

The Trigger is compatible for 3S and 4S batteries. Trigger works also as high current RC switch. Relay is rated for 30A constant current.