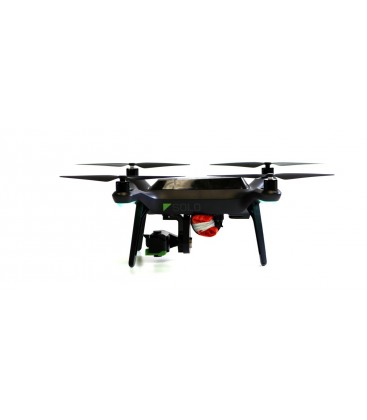 Specifically designed for the 3DR Solo, MARS Parachutes brings forth all new innovation and capability – optimizing size, weight and price in a zero compromise solution that works.

Enter the MARS 3DR Solo Lite System – the very 1st Lite system developed with a high energy spring for rapid parachute deployment. What does this mean for you? With high energy spring deployment, full parachute deployment can be achieved at lower altitudes, allowing the pilot to expand the envelope of flight for greater levels of functionality & capability. Simply put, we’re taking safety to a whole new level.

What makes our Lite system so functional is it’s light weight design that is perfectly paired with a low impact layout, utilizing minimal amounts of space on the aircraft itself. With the 3DR Solo Lite, this system mounts beneath the accessory bay underneath the aircraft, allowing the camera and GPS unit to remain clear and unobstructed for optimal levels of in flight performance.

Low in overall cost, the Lite system employs a massive 58″ parachute system that is perfectly designed to bring the aircraft home safe and sound, with little to no damage at all. This equates to a descent rate of 12 FPS (feet per second) with a low impact rate of 13 joules. In simple terms, this spares you massive crash damage and total aircraft loss, all the while keeping people below out of harm’s way.

Can it get any better? We’re glad you asked. By pairing this system with the auto deployment Mayday system, you now have a fully autonomous safety system that is ready to instantly deploy in the event of failure. This system takes the pilot out of the loop, allowing for the most rapid and effective parachute deployment that can be offered by any system today.

Don’t risk your aircraft, and by all means, don’t endanger people and property below. In flight failure is a risk that can never be avoided, and a threat that should never be taken lightly. By installing a proven & effective parachute system that works, you can take a massive leap forward in aircraft safety, adding an all new element of confidence & control with every flight you take.

How do I deploy a MARS Parachute?
Mars parachute systems are servo operated and can be deployed manual or by a third party controller that uses Pulse Width Modulation (PWM.)

Can I reuse the MARS Parachutes systems?
Yes all the MARS systems are designed reusable.